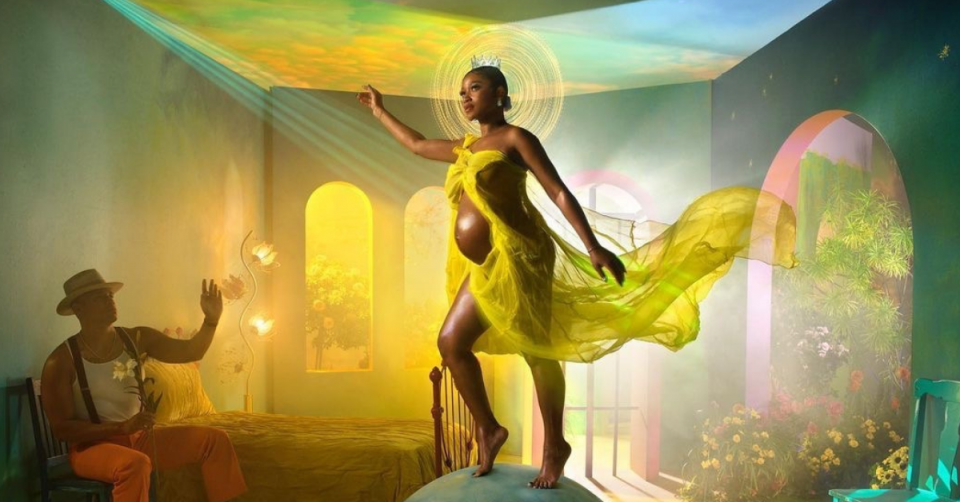 Last December, Keke Palmer set the internet ablaze when she revealed she was expecting her first child while hosting Saturday Night Live. Since then, she’s been blessing us with adorable photos of her baby bump, which she keeps just as stylish as she, dressing her maternal curves in sparkle and luxury athleisure.

However, her maternity shoot photo speaks to the goddess we all know she is.

Teaming with legendary photographer David LaChapelle, Palmer is posed atop a globe wearing a yellow Fendi gown and Alzain diamonds. Her beau Darius Jackson sits on a chair across Palmer in a white tank, suspenders, cropped coral trousers, and a fedora while a flower before his queen.

The photo speaks to the kind of breathtaking piece one can only witness at the Louvre. In her Instagram caption of the masterpiece, Palmer perfectly states that it’s giving poetry, Michael Angelo, and the Sistine Chapel.

The happy couple’s A-lister peers were quick to flood the comments with praise. Actress Jodie Turner-Smith commented “iconique”, director Va$htie stated she looks like “an earth angel” and is living for the art, while actress/singer Ryan Destiny declared that “this is everything!”

We could not be more excited for Keke and Darius as they journey into parenthood and we look forward to her remaining maternity looks.

A Bomb Family Portrait: Monica Denise and Family Posed in Matching Daniel’s Leather + Get the Look

The Faby’s Best of 2022: Stylist of the Year, Including Naya Ashley, Jason Rembert, Maeve Reilly + More

How to Wear Cutouts and the Strappy Trend as Seen on Rihanna, Ciara, Draya Michele and More

Rihanna Is Bringing the Heat to the Studio In Balenciaga Pantaleggings, Wire Cat Sunglasses and More!